Diagnosing a patient requires encyclopedic knowledge, an objective analysis of symptoms and the ability to see the connection between different factors. Can the reasoning process be represented through mathematical formulas? Is artificial intelligence, based on vast collections of data and recently discovered scientific facts, able to match symptoms to a disease more accurately and faster than a doctor?

I am discussing these issues with Dr Jama Nateqi from the startup Symptoma.

One in every seven diagnoses is incorrect. 1.5 million people around the world die each year due to misdiagnoses.

How does Symptoma work and what are the arguments for using artificial intelligence as a diagnostic tool?

Symptoma is a system based on artificial intelligence solutions. The patient enters his symptoms into the search engine and receives a list of their potential causes, each result accompanied by its degree of probability. In that way, patients can self-diagnose even the rarest diseases of which they have never heard before. However, the system’s main task is not to diagnose diseases based on the symptoms entered into the search engine, but rather to reduce the scale of misdiagnoses. This has been a major challenge in medicine for centuries. One in every seven diagnoses is incorrect, which amounts to 1.5 million deaths across the world every year. The main reason for incorrect diagnoses is lack of access to information. It is virtually impossible for one doctor to have detailed knowledge of 20,000 different diseases listed in a contemporary medical encyclopedia. In their first year of medical practice, doctors diagnose on average 500 diseases. The greater the experience and the higher level of seniority, the lower the number of diagnoses, with the number of diagnosed diseases dropping down to ca. 200 after 10–15 years of work. It is a peculiar paradox. One could think that knowledge increases with seniority and that with time doctors should be able to associate symptoms with diseases more accurately. In reality, as time goes by, doctors go through the process of specialization, mastering a narrow field of expertise at the cost of their general medical knowledge.

Let us take a look at how medicine has evolved over the last few thousand years. In the beginning, a doctor assessed a patient’s health on the basis of highly limited knowledge – he did not have the tools to tell the exact body temperature in case of fever. As a result, his knowledge was strictly limited. Today, it is the opposite – we do have access to vast collections of data, but, in fact, they are used only to a small extent. Isn’t it odd that with such a high level of scientific knowledge, a patient consulting three different doctors may still hear three different diagnoses? The accuracy of a diagnosis depends on whether a given specialist has all the crucial information and experience in a given field.

As a society, we still tend to believe that doctors are like an encyclopedia of knowledge. Such cultural, paternalistic conditioning pushed them to act the part expected by the patients. Only in that way are they perceived as “good” doctors. Another undesirable consequence of that is the fear of speaking about mistakes and limited possibilities or skepticism towards patients trying to find out information about their health on their own. This is why we are in desperate need of a new generation of doctors and supporting tools, so that reaching a diagnosis is based on objective data rather than subjective impressions. In the future, doctors will also have to be data managers.

After over a dozen years of practice, a doctor diagnoses only 200 different diseases per year – out of 20,000 listed diseases.

You have mentioned that doctors do not have comprehensive knowledge, which often leads to incorrect diagnoses. It is considered taboo in healthcare. But is artificial intelligence really a guarantee of a better, more accurate diagnosis?

Definitely, which our example proves. The main argument is standardization. With access to the entirety of a patient’s medical information, it is possible to reach a conclusion based on complete medical knowledge contained in algorithms. There is no room for making judgments on the basis of one symptom only or having to make assumptions due to lack of information. It must be stated confidently and openly: in the future, artificial intelligence will be able to diagnose more accurately than a doctor. Today, such statements arouse great controversy and concerns are being raised that doctors might be replaced by AI solutions. They will not, as there will always be a need for an emotional interaction between a doctor and a patient, as well as for the ability to acknowledge the context of the patient’s expectations, needs and worries. But a change of roles is inevitable and the hard analysis of data for the purposes of establishing a diagnosis will become fully automated.

After over a dozen years of practice, a doctor diagnoses only 200 different diseases per year – out of 20,000 listed diseases.

AI is taking over a chunk of doctors’ competences and breaks their monopoly on understanding the ins and outs of medicine. Devising the technology itself might prove much easier than changing the habits and the roles of doctors.

Symptoma seriously divides the medical community. There are some who explicitly say that a diagnosis based on experience cannot be replaced by a machine. They claim that it is too complicated a process, that many details have to be taken into account, whereas AI simplifies it all way too much. However, many counter-arguments can be presented. For example, in the 60s and 70s, doctors noted a surge of infant mortality. The problem was lying in a subjective choice of interventions regarding intubation and assisted breathing in children. Doctors made decisions based only on their experience and intuition, which led to inconsistent practices and many incorrect steps. That was until a procedure was established based on five simple indicators, a procedure used until today. It allowed doctors to save probably hundreds of thousands of children. No doctor questions the principles of medicine based on facts, but, as we often see, these principles are not often followed in practice. I often notice how the first impression clouds objective premises and determines the overall assessment of a patient’s health. This is because doctors do not have access to full medical history, they cannot possibly be up to date with advancements in all branches of medicine, know all the newest medication or treatment methods. And yet, this is what most patients think.

It is not a competition between AI and humans, it is about how machines can assist doctors in making the right decisions.

Patients have already been trying to diagnose themselves, even by typing their symptoms into a search engine. Is it a good or a bad thing?

On one hand, doctors complain that patients acquire information on-line on their own. We claim that this is exactly how they should be taking over the initiative and the responsibility. But I do understand the doctors’ standpoint, as patients usually use either search engines not suited for those purposes, such as Google or WebMD, which contains information about 600–700 diseases. In the case of Dr Google, search results are based on the criterion of popularity. In short, patients do not have access to a reliable tool. This is why a solution like Symptoma may prove groundbreaking. We rely on scientific collections of data, where the process of drawing a conclusion takes into account a series of different factors, such as geographical location, age or gender. However, we must also take into account that a long time will pass before patients change their habits. At the moment, we already have half a million individual users, a rapidly growing number of inquiries and positive reviews from many people, including those who were finally diagnosed correctly thanks to Symptoma after years and years of doctor’s appointments. Such stories are upsetting – one overlooked piece of information can determine a patient’s quality of life for years or even determine if they live or die.

Another problem in developing artificial intelligence for medical diagnosis may potentially stem from the way the healthcare industry and the reimbursement system are organized.

That is a major issue. Currently, it is impossible to establish even which procedures towards patients are correct and which are not. This means that we cannot say: patient X was taken care of properly in keeping with the regulations and patient Y was not. As a result, the refund for the services provided to patient X will be bigger. The system of financing healthcare services is based on procedures that are beneficial for the service providers, not on the results of treatment. A market organized in such a way breeds dysfunctions. You can already see the first signs of changes for the better and I am convinced that with the popularization of the technology, new solutions will be taken into account by people involved in devising healthcare policies.

What time frame should we prepare for?

At first, the innovations will reshape the private healthcare market. I do not expect politicians to introduce the changes into the public sector. However, I do hope it happens eventually as a result of pressure from patients who expect positive reforms. In my opinion, the commercial sector of healthcare services will change drastically under the influence of the technology within the next 5 years and the adaptation of the innovation into the public healthcare system will begin in the next 10 years.

And what if artificial intelligence also proves to be imperfect and leads to incorrect diagnoses?

It is not a competition between AI and humans, it is about how machines can assist doctors in making the right decisions. It is a method of broadening doctors’ current knowledge, a method of increasing the quality of the diagnostic process, an additional tool for improving the doctors’ level of competence.

So how will AI affect the medical profession in the future?

A new specialization will appear, that is, medical data management. Artificial intelligence will not replace us in all activities, but surely diagnoses will be reached much sooner than they are now. The role of a doctor will focus more on preventive measures and treatment.

Discussion | What is the most critical issue in digital health today? > 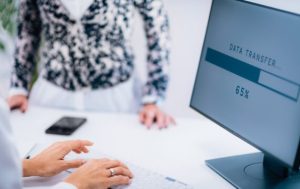 VISION | With digital health innovations, we can create ONE CARE system >